#36 - What's Your Expertise? Outsource The Rest! 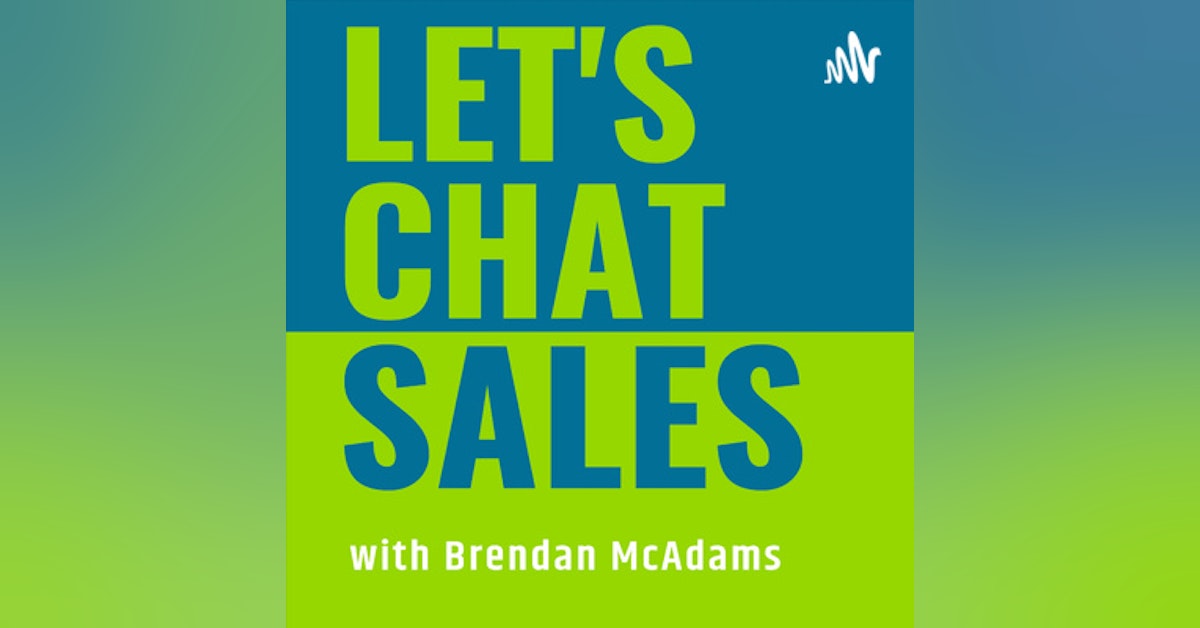 This is a quick one... As a founder that sells and wants to grow your business, you need to be efficient and focus your skills on what you're good at. And you're probably not good at everything, right? In this super short episode, Brendan and Bob discuss how you should think about your time and why you should delegate to others.

This is a quick one... As a founder that sells and wants to grow your business, you need to be efficient and focus your skills on what you're good at. And you're probably not good at everything, right? In this super short episode, Brendan and Bob discuss how you should think about your time and why you should delegate to others.

To learn more about B2B sales and get regular updates, sales tips, templates and other resources, sign up for Brendan's newsletter here. And to purchase Sales Craft: Proven Tips, Practices and Ideas to Advance your Sales Success, click here.

Hey Bob. Uh, guess what? It's it's another edition. It's another episode. I should say. Let's Chat Sales. Yes. Yes it is.

So I thought we'd chat about that for a bit. Okay. Can

I talk about the reasons why I'm not very comfortable outsourcing? Yeah. Fire away. Okay. So a couple reasons come to mind immediately. No one can do it as well as me. It's going to take me way too long to train someone, to do it the way I want to do it again.

As soon as I train them, they're going to leave and go somewhere else. So I've wasted my time. I've got to constantly check behind them and I'm teaching someone a skill and they're going to go out and become my competitor.

Yeah. Okay. They're pretty good. Some of my tea I completely agree with and some of my don't and here's why, like, I know for a fact I'm terrible at web.

Well, for a lot of simple reasons, one is I'm clearly not as good at it as someone that does it on a regular basis, there are a lot of nuances and things that once you learn how to do web development, for example, or create a web page or create a landing page, you get really good at it.

But there are little EO secrecies to the. That if you don't do it every day or consistently, you have to keep remembering them, or you have to keep going back to your notes and it's just totally time-consuming.   The other thing is it happens like quicker, definitely with more quality and maybe that's kind of redundant.

When I'm paying someone to do a service, I can be more critical than I can with.

If I'm yet, I've built some webpages for myself and it's like, I don't really like the way this looks, but this is as far as I could get it . But if you're paying someone, you have the ability to say, look, I'm sorry, this isn't what I was looking for.

Yeah. And you have that one step away from the product where you can be evaluated. In a way that I don't think we can when we're the

creator. I agree. you get more ideas. You get other perspectives. sometimes you can push the other person to do a better job .

as a founder,  you want to be good at everything. You want to figure out how to do everything , and there's nothing wrong with that, but.

As you get further, along in the business, you've got to free yourself up from those things. And so I find to be able to be self-aware enough to know what you should not be doing and what you should outsource to others. And when it makes sense to spend money with somebody else, because they can do it better, faster, and cheaper.

And oftentimes you can get all three of those. If you value time, but what I would

say, Brendan, the caveat, a caveat I would give is you have to be involved. You have to oversee it.

I see with a lot of founders and entrepreneurs, it's either I do it or I don't touch it.

Yeah.  There's a middle ground where it's like, I don't do it, but I know what I'm looking for. And I have the vision. And I think the founder's role really shifts from being the doer to the visionary.

Will you still have to manage things? And that is what a founder ultimately does.

This is one of the must have skills for a founder is the ability to delegate, but still scale. If you want

to scale, you've got to be able to, if you're happy with five customers, there are plenty of founders that hate to say, but the words flounder I've worked with companies where the limiting factor is the person charge.

and I think that's the equation, most of the founders I talked to don't want to spend money.  They don't see that to scale. You've got to build a team and you've got to bring in outside expertise.

And really when we talk about outsourcing, I would shift the discussion, not just to delegating, but bringing a broader perspective to the table.

Good. Figure that out. They figure out where, where their strengths lie and where they need to leverage their ability. And as you get further, along in the business, that's going to be around vision and sales and, leadership of the company.

For me, I was late to this,  I spent for a long time thinking I could do everything, you're trying to do everything myself and  now I find that it's  it's. To be able to hand stuff off to someone and say, Hey, here's what I want.

Here's what I'm thinking about. And they go off and do it and they deliver it back  it's fascinating to see how it can accelerate your business. Are there areas,

branding where you think someone should really think about outsourcing versus not outsourcing?

Man, that that's simple math. And you ought to take that into account

So if something's repeatable and you're doing it over and over again and it's processed well, then it certainly begs to be. Delegated to someone  who's skilled at that. So blog posts, podcasts, content development those sorts of things, graphics. Yeah. All that stuff that if you can, you know, website development, of course, landing pages and, and, , email marketing. If that's not your skillset, you know, if you can't do it like in an instant, then you want. And you want to figure out a way to get someone in to help you with that.

If it's something that you do once and it takes more time to train someone then yeah.  That's your other example you brought up earlier, right? Then, then, then that's probably see, it's probably just better to crank it out, at least until you can make it a process

outsourcing. What are your views on

We'll see, that's funny because you say that because, that was a job that I used to have. I used to do that. I was a guy that was hired by tech companies to help extend their sales capability. And, it made a lot of sense for them because I could get up to speed really quickly, because I knew the market, healthcare and technology and so forth.

So it was smart for them. And then when they got to a certain scale and they said, all right, Brendan, we don't need you anymore we're going to hire. I said fine. Then it made sense to bring it in house, so yeah.  Hiring outside marketing people, outside salespeople.

I think that makes it tough.

Although I would give the cautionary tale is you don't want to just from day one to have someone else do your selling  you need to be involved with the customer to understand what it is they want.

And how you deliver it and to hear those challenges. So I hear the founder listening to this and going, oh, this is great. I don't really want to do sales. No, let me call this person and let the

person do it. No,  this is fundamental to this whole philosophy. Here is.

Early stage founders need to know how to sell because for a long period of time, they're developing relationships. They need to understand the obstacles. They need to understand what the drivers are for the business and the industry, all those sorts of things. Yeah, you can't outsource that at the early stage  at some point you can hire people or you can recruit, you know, you can do some sort of outsourcing, but at that point, you know exactly what kind of talent you're looking for.

The thing about this I find is, you know, just to kind of wrap up is,  it's been kind of liberal. to be able to say, oh, this is not in my area of expertise. I'm going to find someone who's good at it. Whether it's fiber or, someone I know from a university or, or, or a recommendation I'm constantly lookout for good talent to kind of extend my abilities.

And,  it's another good reason to have a good network because you know, you get references from other people and, and, and that can save you a lot of. And that's, you know, in a sense that's a form of outsourcing.

I got meta on you there. I'm sorry about that. I'm  stumped my sidekick.

You did. I didn't see that

coming user. I know you got there.   I think it was a great discussion and. It's something that you have to evolve with.

right. I think, I think we beat the crap out of this one.

What do you think, Bob?

I think we did. I am just hoping Brendan, that can come back for another episode of let's chat sales. Oh boy. Here we go.

Sorry about that folks. All right, here we go. All right. Hey Bob.