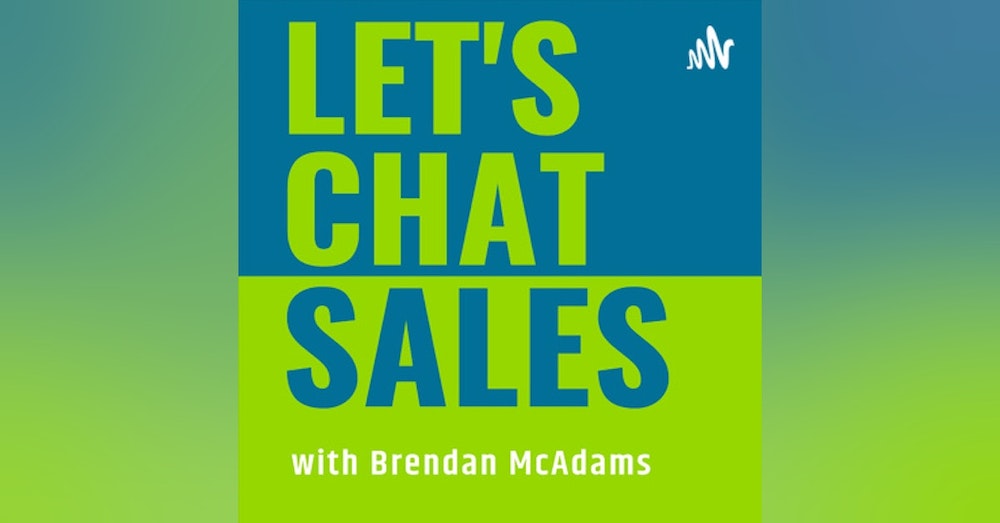 One very reliable way to find new B2B sales opportunities is to talk to people down in the trenches. It's down in the inner workings of the business where the difficulties lie, where the inefficiencies are rampant, and where things are held together by baling wire and chewing gum.

In this quick <9 minute chat, Brendan and Bob talk about why people matter and how to be on the lookout for new deals and new ideas.

One very reliable way to find new B2B sales opportunities is to talk to people down in the trenches. It's down in the inner workings of the business where the difficulties lie, where the inefficiencies are rampant, and where things are held together by baling wire and chewing gum.

In this quick <9 minute chat, Brendan and Bob talk about why people matter and how to be on the lookout for new deals and new ideas.

To learn more about B2B sales and get regular updates, sales tips, templates and other resources, sign up for Brendan's newsletter here. And to purchase Sales Craft: Proven Tips, Practices and Ideas to Advance your Sales Success, click here.

Hi. Well, you've stumbled on to yet another episode of Let's Chat Sales. And in this short episode, I think it's like seven or so minutes. We talk about one way to find new sales opportunities, especially in a B2B space, Bob and I kind of dig into it, how to think about it, what to look for and hope it's helpful.

And let's dive in.

And it's really great if you can call on some senior executive decision maker. That's good. That's a good relationship to have because ultimately that's where the approval gets made, but that's not typically where the problem exists. Right? Most of the time, those people, if they know about the problem, they know about it only tangentially or at some very high macro level.

And so one of my mantras, or one of the things I like to say is that when you're selling into any kind of a business and really where you're selling to anyone, it's everybody matters. I just think that's an important philosophical framework to have, because it's the people down in the organization, deep in the organization, sometimes that know exactly what's going wrong and they're the ones that have to deal with it.

And they're the ones that, that, uh, struggle.  This is where you can find a whole new business, or you can find an angle in that solves a problem.

And it might be just part of the problem you ultimately want to solve. Right. Yeah. It's just really marrying what they're struggling with to what you can do.

Yeah. And then getting your foot in the door.

Correct? Yeah, exactly. And, and the nice thing about it is that, because they're living with the problem and they need to get it solved. Uh, they can share with you lots of very specific details. These are the sorts of things that, that build your case study.

Like, Hey, if you solve this problem, you can reduce the error rate by X percent or you can compress the shipping time by three days. And that's the sort of stuff that you don't get from the CEO or some senior person typically.

Right. Well, and those people in the trenches also often will provide you exactly what the right solution is. They just can't do it.

They're they're caught within a system, but I've had people say to me, you know, if I were starting a company, this is what I would do. Yeah. And like, you take copious notes since like, Hey, funny, I've got a

company that can do that. Yeah. You can be that company. If you're a founder looking for an idea,  pick your industry, talk to a bunch of people down in the bowels of the organization that have to get stuff done. You're going to find all sorts of situations where they're doing everything on spreadsheets, or they're doing everything with paper or they're using some antiquated system that's, what do they call bailing wire and chew chewing gum, to keep things together. There are opportunities galore that way, but you have to find them. I think you have to find them down in among the people that have to live with the problem.

And you have to listen. Yes. You know,

it's, it's not you looking for them to say what you're trying to solve. It's quite the opposite. Let me gather all this information, figure out what the solution is that they need in that moment. But I know one of the challenges that would come up with someone is if I'm a founder and I'm talking to anyone in a company I'm having.

Because it's really hard. Sometimes it's hard to get, to get even to get a phone call with someone. So how do you negotiate that? I've got someone, but they're not really that person. How do you go to actually get to that person at the not top

level? That's a great question. So if you're talking to someone pretty high up in the organization, then they don't usually have any resistance to you talking to people underneath them.

It's usually the other way around, you know. People have a resistance to saying, I want to, I want you to, I don't really want you going over my head. But if you're talking to some senior vice president, then the simple way to do it is to say... You know, I'd like to understand this from a much more of a grassroots level.

So  who could I talk to in your organization that would know this problem, because I want to make sure. And you could say that you're qualifying. I want to see if we can actually fix this for you, because if we can't, you're going to get a call back from me and say, I'm sorry, but this is not in our area of expertise.

We can't build it or, or we, or we could build it, but it would be extra to be a custom deal. And maybe that's what you want to do. But, typically that senior person will not be that resistant to, oh yeah. You should talk to so-and-so in this department and you should talk to, and they'll they'll point you the right people.

They're probably going to do it because you're otherwise gonna circle back around and say, Hey, you know, I called so-and-so that manager. And they just weren't responsive.  Then typically answers. Let me see about that. And then  they'll recalibrate their priorities,

Yeah. That's a good way to put it. I've had to recalibrate it.

Yeah. So the reason why this is an interesting problem is because as you can probably imagine what happens is someone down at the level that's working on this stuff doesn't typically. You know, if they report these things up, they, they get filtered, they get minimized and so forth.

And oftentimes, someone's got so many problems to dealing with that they, this just doesn't rank as a priority, but if you can come in and solve it. You can figure out a way to solve it. Like, Hey, here's the problem you have, and this is the value and I can solve it and you don't have to do anything except, you know, cut a PO or whatever, then all of a sudden, oh, that that problem is off their plate and you've done that.

So those opportunities are just there. Just as kind of a little background, the way this prompted me is I've kind of always, this has been a strategy that I've just always employed in with enterprise sales in particular, when you've got accounts where you're in there all the time, this pays off because you're constantly finding little areas of inefficiency and  opportunity, but it was prompted to me by a Michael Lewis podcast because they were talking about Athena Health and how they went after "Level Six" people, six people down inside the organization, And that kind of prompted me. So if you, everyone wants to listen to a Michael Lewis podcast, it's, it's just kind of a clever little story and it just prompt me cause that's kind of what I do now.

You can't do this for all your clients... unless you're a solution shop and that's what you focus on, but if you're dealing with some big enterprise account where you think that there's a lot of opportunity, long-term opportunity relationship, this pays off.

Couldn't it also be an opportunity to get into a company that you don't have an established relationship? Yeah, absolutely. Yeah, it's certainly easier in some ways if you're already established with that company, but to me, talking to people that actually are dealing with the day to day problems.

Yeah, can really be a gold mine and they will also champion you up the

Boy, this guy's really spent a lot of time listening to what we're trying to do. He really gets us. I think you should really listen to him.

Yeah, exactly. And this could be... you run into someone at a kid's soccer game or at a cocktail party.

Or, you know, your wa or wherever a bookstore and you, I don't know how, however you run into somebody, you get to talk to them and they're having to be at, you know, I don't know, Black and Decker, whatever.  Anyway, you're chatting about something and, you know, and you say, this is what I do, blah, blah, blah, by the way, what are you working on? And it could be some guy or gal, you know, that's just working on some particular, well, what's what works?

What does it mean? How's it going? How's it, uh, you know, and then you start probing in on that. Now there may be an offer. Hey, you know, we might be able to help you with that. You just never know, but it's those opportunities are everywhere.

Well, as you would say, Brendan, I think we've kicked the crap out of this enough for one day, right?

Yes, we have. I think

hopeful and I'm anticipating, we'll get to do another episode of Let's Chat Sales. If you really like Let's Chat Sales, rate us five stars and share it with someone else so that we can chat sales even more. Very good. Good talking to you, Bob. See ya.